Find Your Stuff with a Customizable Bluetooth Keychain

Find Your Stuff with a Customizable Bluetooth Keychain

South Florida Tech Start-up Creates a Customizable Bluetooth Device that Finds Lost Stuff. Blue Ring Technologies, a startup tech company in Davie, FL, recently launched a crowdfunding campaign on kickstarter.com in search of $3,500 to fund its first product, the Jayster keychain. The company plans to use the funds to help raise enough capital to produce their first 100 units. The Bluetooth device comes with a complimentary app for iOS and Android devices. 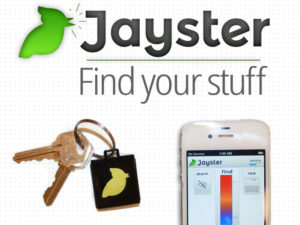 Developed by Miami native and software engineer, Joaquin Prendes, the Jayster device can help you find and track misplaced items using an app on your phone. The company claims the Jayster keychain and app will be the most user-friendly system for finding lost valuables. The Jayster keychain uses Bluetooth Smart technology to connect to your phone. Once your phone and keychain are connected, the app offers three key features to help you find your lost keys and prevent the loss of your phone. The alarm feature sounds an alarm so you can hear where your lost keys are. The hot/cold feature indicates whether you are getting closer or farther away from your missing keys. And the nest feature wirelessly attaches your phone to your Jayster keychain – If the two separate more than 15-20 feet, an alarm will ring, preventing you from losing your phone. They advertise the nest feature being extremely useful in public places like restaurants or a work place, where people most commonly lose phones. The company offers different colored keychains with an imprinted Jayster logo as well as a customized option, giving customers the freedom to design their own keychain. The device is expected to have an 18-month battery life and ships internationally. “Growing up in Miami, FL, it has always been my dream to start a tech company in South Florida. My goal was to create a device that helps make life a little easier and gives people back hours of their lives that are wasted searching for lost valuables. I couldn’t be more excited to launch the Jayster keychain this fall,” says company co-founder and inventor, Joaquin Prendes. The kickstarter campaign is off to an impressive start raising over $3,000 in one week. The campaign ends September 13, 2013 and the company expects to begin shipping Jayster keychains to customers in October 2013.